Guys, 5 acts is back again and it's super low pressure, you just write down some kinks and people write comment fic for you. Yay! I have a ton of ideas of things to write, now I just need to get down to it. (Note to self: you are not allowed to do any more canon rewatch just to write comment fic.)

femslash12 stories are out! The masterlist is up here.

My favorite one so far: cupid's got a gun by

lastwingedthing, which is Teen Wolf, Lydia Martin/Ms Morell (played by Bianca Lawson aka the woman who doesn't age.) But it's really about Lydia and how she's strong and smart and she can't really deal with what's happened but she can do fucking magic and keep her head up. Basically this is what I want for Lydia - to see her come back from being someone else's pawn/object. And Ms Morell works really well as a mentor, someone who can keep up with Lydia and cares about her and won't lie to her. It's just brilliant, beautifully written, sweet and sad and hopeful. And the whole teacher/student thing is dealt with in the best possible way if that is a squick. GO GO READ IT.

Aaand... it is way past time for me to go to bed. The boy is sick with a cold and I really need to try to avoid getting sick too. But I was determined to post this before I get busy and forget.

At some point I will make the post about what is going on with my life these days (I has jobs!) and try to catch up with folks. I do not understand what LJ has done to filters - every time I try to read my flist, I am pulled into the vortex of fanficrants or something like that. I'm guessing that means it's time to do some housekeeping. Ehhhh.

Here's how it works:

I just watched all of season 1 of Teen Wolf in like two days. It pretty much went like this:

STAGE 1 - OH GOD THIS IS SO BAD WHY AM I WATCHING THIS CRAP. *watches Allison and Scott make out for the millionth time* I AM JUST STICKING THIS OUT SO THAT I CAN UNDERSTAND THE KNOTTING FIC FIC.

STAGE 2 - Okay, it's got some good moments. Like, oh, EVERY SCENE WITH STILES. I am utterly predictable. Also totally on Team Lydia.

Is there Kate/Derek fic? With them doing kinky sex stuff? Because UNF.

STAGE 3 - Loved "Night School"... I'm a sucker for a good horror movie cliche. LOL they totally stole the gym scene from "The Faculty."

STAGE 4 - Kinda bored. I don't know... The supposedly smart people are acting really dumb for the sake of PLOT (pet peeve). Also the faily bits are becoming more and more apparent to me.

Like in a way I can see where Jeff Davis is coming from with "it's a utopian world where there's no racism, homophobia, etc." but (A) that is more fantasy than the werewolves and (B) YOU FORGOT THE SEXISM, ASSHOLE.

STAGE 5 - TOO LATE. I'M READING ALL THE FIC. Or rather, all the pre-season 2 fic. BECAUSE APPARENTLY I HAVE PLANS TO WATCH SEASON 2.

This show basically wants to be Buffy with werewolves but it's not clever or funny enough to pull it off. Buuuut there's a lot of pretty people who make interesting romantic geometrical shapes. And the fandom is like a big fucking fandom reunion. And the actors tweet about shipping and basically offer themselves up as fanservice. It's awesome except I am not totally sold on Derek/Stiles and that is like 90% of the fanwork. Which I wouldn't even mind so much except 90% of THAT is toppymctopperson!Derek and bottom!Stiles with stereotypical power dynamics NOOOOO FANDOM THIS IS WHY WE CAN'T HAVE NICE THINGS.

But I could OT4/5/6 so hard. Where are the multi-shippers at?

RIGHT. BACK TO LURKING NOW.

Okay, fandom! Sometime in July, maybe even on July 1st, control of Delicious will transfer to AVOS. Any Delicious account that has not explicitly opted in to the transfer will be lost forever. I would like to generate a list of fannish accounts that have not opted in and back up all their PUBLIC bookmarks. To do this, I need a lot of help, in not a lot of time. That's where you come in. Things you can do to assist in this endeavor:


And what will I do with all the archived accounts? I don't exactly know yet. For now, I just want to be sure that someone, somewhere, has a copy of all this fannish data. Once the transfer to AVOS goes through, we'll get a feel for the new landscape of Delicious and weigh the options.

As I'm sure most of you in the US know, the government is in danger of shut down if a budget isn't passed tonight. Republicans in the Senate are taking advantage of this to try and cut federal funding of Planned Parenthood and Title X.

Just to be clear, there is NO federal funding of abortion. If they succeed, what will be cut is women's health services, STD and cancer screening, family planning and contraception and it will disproportionately affect low-income women. Abortion services only make up 3% of the care PP provides. According to Senator Leahy (my senator ♥):

What can you do? Sign the Planned Parenthood petition and call your senator's office. You can also get the phone numbers for all your representatives on the NOW website.

ETA: US Troops will have paychecks withheld if the government shuts down. Damn. This is basically politicians gaming the budget process and who will suffer for it? Soldiers and their families.

This afternoon, I was listening to a long Clark/Lex podfic and started to drift off (the fic isn't boring, I was just sitting in a warm room.) So, I went to lie down in the bedroom where it was cooler and lo, several hours later, I woke up all discombobulated and headachey. Note to self: you're supposed to be sleeping at night! I seem to have trouble with this concept.

Jean Auel (Clan of the Cave Bear author) has the final book of the series out. I think I read the first three books and then got a bit bored, but I might check out it because... CAVES! I was amused by this part of the interview:

GR: Describe a typical day spent writing. Do you have any unusual writing habits?

JA: A typical night. I'm a night person. Generally what happens is that I get up about two in the afternoon, and I make what is my husband's lunch or dinner and my breakfast, and we spend some time together in the evening. Then he goes to bed and I go to work. I often catch the sun rising. Mornings are terrible for me, so I'd rather sleep mornings.

I haven't become that extreme yet but there have been a lot of days where I go to bed just as the boy is getting up. (He points out that you can really only do that if you're a best-selling author. Or unemployed.)

Speaking of the boy, he discovered a new source of amusement that rivals lolcats: British Royals Hats. OMG, so ridiculous! The Ascot seems to draw the most awesome/awful hats. This is Princess Bea in what is colloquially known as "the guitar pick." 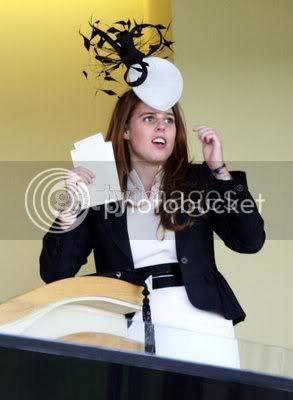 If you want to see more, the Mad Hattery is a blog dedicated to crazy royal hats. The most recent posts are not that interesting but I knew when I saw The Queen's pimp hat that we had stumbled upon something truly amazing.

There's this pink monstrosity and something that is possibly the ugliest hat I've ever seen (it looks like pieces of lemon peel glued together.) And hey, Princess Anne giving the camera a very we are not amused look. :D

Oh, my. How did she ever think it was a good idea to attach that to her head?

After you look at enough of them, you start to get desensitized and something like this seems fairly normal (despite looking like a spaceship and covering half her face) just in comparison. Then it takes something truly bizarre like The Queen of Denmark in costume to really make you rofl.

I have no idea what's going on here.

I'm really bad at remembering acronyms and stuff, so this is mostly for my own reference. May be updated as I come across things.

Hello! I'm back home in Vermont now, have been since New Year's, and recovering (knock on wood) from a cold. And I have a rec! I know, me, a rec... craziness.

Lady in Waiting by anonymous; it's a completed Gwen/Morgana fic on the kink meme with a "consensual D/s relationship but with inescapable mistress/servant power differential" and I think you can tell just from that that it's going to be interesting. It also includes corsets/breathplay and some "use of knights as sexual objects" (and the author says swordplay, but it's barely there.) It's really DAMN HOT but also complicated and all about trust and the meaning of kink, and Gwen is lovely and subby in an amazing, strong way and Morgana is flawed and very much herself. I think some of you... you know who you are... would find it to be up your alley.

sophinisba! Totally should have guessed that.

Threats Against LGBT People Persist in Rural America... [and everywhere else]

One of the most moving moments in Out in the Silence occurs when C.J., the gay teen who has been tormented for over a year at his small town high school, says: "This place isn't like New York or DC where everybody's liberal. I get threats to be killed."

In August, the OITS Campaign was starkly reminded of just how real the threat of anti-LGBT violence is, especially in small towns and rural communities where even a small minority of intolerant individuals can poison the atmosphere of the entire community.

The ugliness took place in Coudersport, a small town nestled in the ruggedly-beautiful hills of north central Pennsylvania. Despite a series of harmonious and successful events in neighboring towns, the OITS Campaign was met in Coudersport by a barrage of Tea Party and fundamentalist activists who tried to shut the screening down and called for defunding the public library simply for being the site of an openly-LGBT event.

Fortunately, the library board was not to be intimidated, and the resulting publicity helped to create an extraordinarily well-attended, diverse and productive town-hall event that received national media attention: Potter County Library Faced Protests Over Gay Documentary (Harrisburg Patriot-News)